an evening recital with the Trio Gaspard 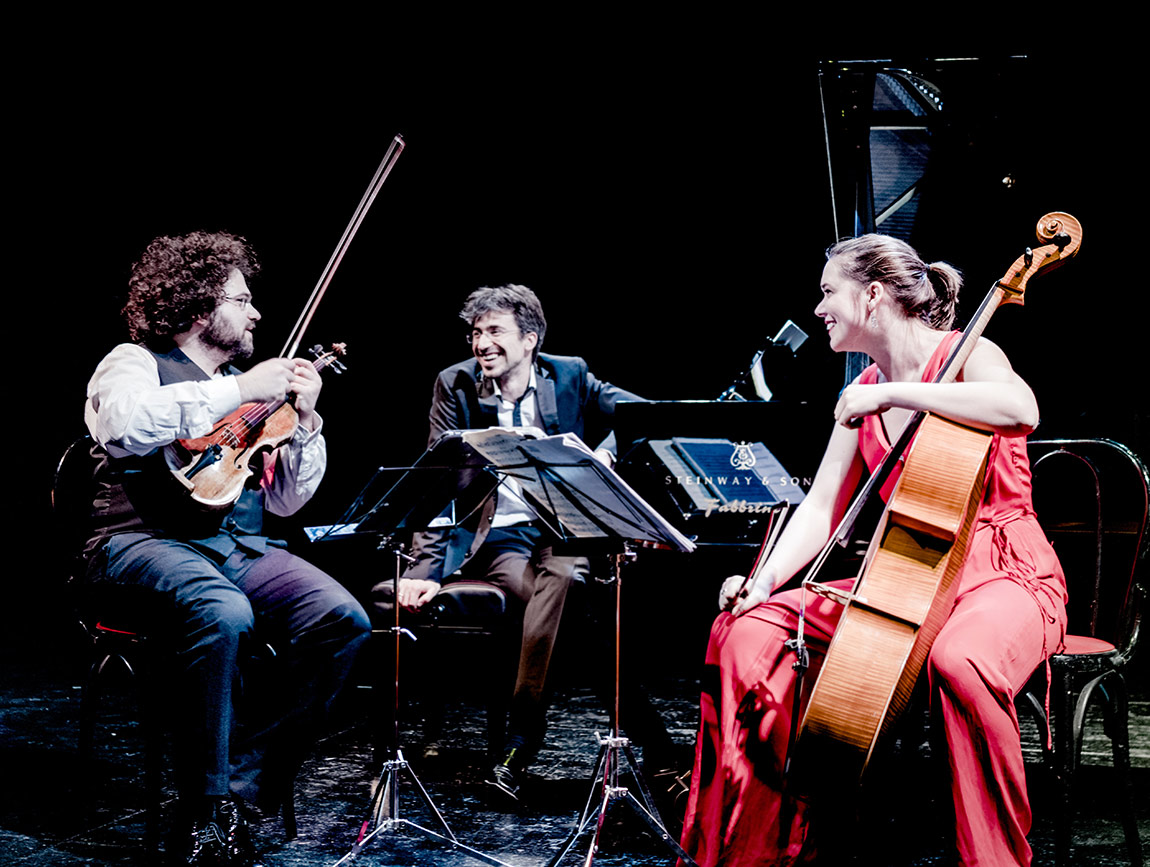 For our third recital of the season, we are pleased to present Trio Gaspard.  Three-time winners of major international chamber music competitions, they are now regarded as one of the most sought-after piano trios of their generation.  Founded in 2010, the German-Greek-British musicians, consisting of three successful soloists in their own right, have been invited to perform at concert venues across the world as well as giving masterclasses and adjudicating competitions, thanks to their considerable teaching experience.

This will be the first performance by a piano trio at Breinton and will feature a programme of Haydn, CPE Bach and Mendelssohn.

Founded in 2010, Trio Gaspard are one of the most sought-after piano trios of their generation, praised for their unique and fresh approach to the score. Trio Gaspard are regularly invited to perform at major international concert halls, such as Wigmore Hall, Berlin Philharmonie, Essen Philharmonie, Grafenegg Castle Austria, Salle Molière Lyon, NDR Rolf- Liebermann Hall, Hamburg and Shanghai Symphony Hall as well as making appearances at festivals such as Heidelberger Frühling, Mantua Chamber Music Festival, Boswiler Sommer and PODIUM Festival Esslingen. Important engagements over the past year include recitals in Belfast, Trieste, Naples, Bern, Heidelberg, Grafenegg Festspiele as well as at Berlin’s Pierre Boulez Saal. A highlight of 2018 was performing Beethoven triple concerto twice in Switzerland under the baton of eminent musician and conductor, Gabor Takács-Nagy.

As well as exploring and championing the traditional piano trio repertoire, Trio Gaspard works regularly with contemporary composers and is keen to discover seldom-played masterpieces. In 2017, they performed a commission from Irish composer Gareth Williams at the Belfast Music Society, broadcasted live by the BBC. They have also played the rarely performed “Présence- Ballet Blanc” for piano trio and speaker by Bernd Alois Zimmermann, working alongside contemporary dancer Luka Fritsch. Their performance of the Zimmermann was recorded live at the Boulezsaal in Berlin was released on the trio’s “Live in Berlin” CD, in cooperation with German Radio. In 2021 Trio Gaspard signed with Chandos Records, their debut project with the label is to record all 46 Haydn trios over the next 5 years, the first album of which will be released in 2022.

Trio Gaspard, whose members hail from Germany, Greece and the UK, has worked regularly with the co-founding member of the Alban Berg Quartet, Hatto Beyerle. They also studied at the European Chamber Music Academy, where they worked with Johannes Meissl (Artis Quartet), Ferenc Rados, Avedis Kouyoumdjian, Jérôme Pernoo and Peter Cropper (Lindsay Quartet). The trio already has considerable teaching experience, having given masterclasses at Kyung-Hee University in Seoul, Korea, at the Royal Irish Academy of Music in Dublin and at the Shanghai Chamber Music Festival 2016 and 2018, where they also sat on the jury of China’s national chamber music competition. Trio Gaspard held a fellowship of chamber music at the Royal Northern College of music in Manchester from 2017-2019, where they taught, gave masterclasses and performed regularly.

The performers will be indoors and there are three types of tickets:

Jonian Ilias Kadesha has Greek-Albanian roots and lives in Berlin. The young musician not only speaks Greek, Albanian, German and English but also has a keen interest in philosophy and rhetoric.  His playing is characterized by stylistic accuracy in the interpretation of early to contemporary works, and in the exactness of his articulation. With boundless imagination of sound, Kadesha is always in search of something new.  He is a prizewinner of the Deutscher Musikwettbewerb, Windsor International and the Leopold Mozart Violin Competitions.

German-English pianist Nicholas Rimmer is passionately committed to exploring the piano in all its musical contexts, whether as solo instrument, in a large array of chamber music formations, accompanying voices or as a vehicle for improvisation. His musical training began as a child at the Royal Northern College of Music in Manchester studying piano, organ and conducting as a teenager, from where he went on to read Music at Clare College, Cambridge. There he held an organ scholarship and worked with conductors including Ivor Bolton, John Eliot Gardiner, René Jacobs and John Rutter. After moving to Germany he developed his studies with a wide range of musicians including Wolfram Rieger, Hatto Beyerle, the Alban Berg Quartet, Ferenc Rados whilst embarking on a successful career as a pianist with a particular focus on chamber music.

Born in London into a musical family, cellist Vashti Hunter is currently based in Berlin and enjoys a versatile career as soloist and chamber musician, being invited regularly to play in some of the world’s leading music festivals and concert halls. She is the first British cellist ever to be awarded a prize at the International Cello Competition ‘Prague Spring’ in its 65 year history.  Next season’s highlights include performances at the Wigmore Hall and LSO St.Lukes in London, a tour of the USA and a return to the Barbican Hall, where she will play Haydn Cello Concerto in C Major. She will also make appearances at the Lockenhaus Festival in Austria and at the Essen Philharmonie in Germany with BBC Young Generation Artist, soprano Katharina Konradi.