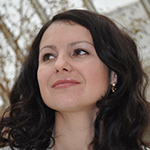 Svitlana Kosenko was born in Ukraine and studied at Kharkov University of Arts with professor Meinikov and in Germany with Professor Mokatsyan. In 1999, she won second prize in the International Competition of French-Polish Music in Paris.

2001 saw Svitlana take first prize in the Smetana International Competition and was awarded a Special Prize for her performance at the Enescu Competition. In 2012, she won Best Pianist at the Joseph Suder Lieder Competition. Since 2014, Svitlana has been Accompanist in Residence at the Yehudi Menuhin School.