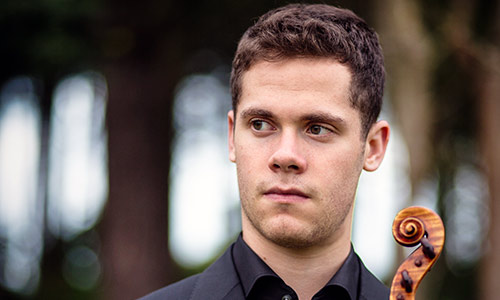 Callum Smart attracted wide public attention at the age of thirteen having won the strings category of the 2010 BBC Young Musicians Competition performing Mendelssohn’s Violin Concerto with the BBC National Orchestra of Wales and Vasily Petrenko. In the same year he went on to become the top European prize-winner at the Menuhin Competition and now enjoys critical acclaim for his lyrical and accomplished interpretations.

Now with two recital discs to his name, 2016 saw the release of Callum’s second disc on the Orchid Classics label with pianist Richard Uttley. ‘La Voix’ – including works by Fauré, Poulenc and Ravel – featured as one of the Strad Magazine’s recommended recordings of the month, and was accorded 4 star reviews both in the BBC Music Magazine and the Observer.

Performing in recital at venues including London’s Wigmore Hall, the Konzerthaus Berlin and the Auditorium du Louvre in Paris, Callum’s partnership with Richard Uttley continues this season with recitals across the UK and a new collaboration with horn player Ben Goldscheider. Other recital performances have seen Callum appear at a number of European festivals including the Cheltenham Festival, Dvořák Festival in Prague, Menuhin Festival, Mecklenburg Vorpommern and the Malmö International String Festival.

As the recipient of the Premier Young Artist Award at the Jacobs School of Music in Indiana Callum currently studies with Mauricio Fuks, having previously attended the Yehudi Menuhin School and the Chetham’s School of Music.
Callum plays on a c.1730-35 violin by Carlo Bergonzi.