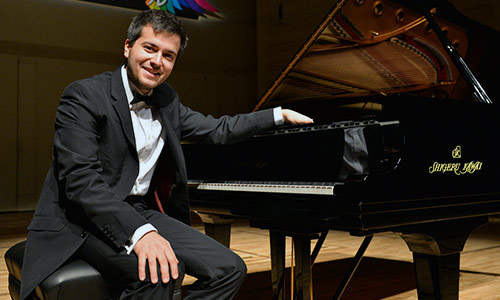 Described by Martha Argerich as ‘an outstanding young pianist’, Romanian/British pianist Florian Mitrea is the winner of the 2018 Royal Overseas League Piano Competition, and a double-laureate at the 2017 Scottish, 2017 Saint Priest, 2015 Hamamatsu and 2014 ARD Munich International Piano Competitions.

He has performed in the UK in halls such as King’s Place, St John Smith Square, St Martin in the Fields and Colston Hall, and in Germany (the Bavarian Radio Studios – Munich and Schwetzingen Festspiele), Japan (Bunka Kaikan Hall in Tokyo and Sonic Concert Hall in Oomiya City), South Korea (Seoul Arts Centre), Poland (Szymanowski and Chopin Academies), Switzerland (Stadtcasino in Basel), and Romania (Romanian Athenaeum). He performed as soloist with the Philharmonia in London, Collegium Musicum in Basel, and the George Enescu Philharmonic and Romanian Radio Chamber Orchestra in Bucharest. He is a Making Music 2017-19 Philip and Dorothy Green Young Artist Award winner, a Kirckman Concert Society Artist for 2018-19, and he has successfully auditioned for the Manchester Mid-Day Concert Society. In 2016 he has been appointed a Kawai Global Artist.

Reviewers have described Florian’s playing as having ‘stupendous virtuosity’ (Süddeutsche Zeitung, 2017), ‘phenomenal precision throughout’ (The Herald, 2017), and presenting ‘a mixture of phenomenal technique and ravishing musical intelligence’ (The Cambridge Independent, 2018). His debut CD has been described as a ‘confrontation between reason and nostalgia […], a gamble won by a pianist of whom we will hear many things’ (review by Cătălin Sava in The Republic).

Florian trained under Flavia Moldovan and Gabriela Enasescu in Bucharest at the George Enescu Music College before winning a scholarship to study at the Royal Academy of Music in London under Diana Ketler. He graduated with First Class Honours and the DipRAM Distinction, and he is now a teacher within the Piano Department. He continues his studies at the Imola Piano Academy under Boris Petrushansky.