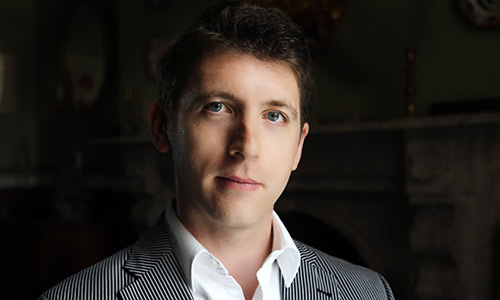 One of Ireland's most successful musicians, Dubliner Finghin Collins was born in 1977 and studied piano at the Royal Irish Academy of Music with John O'Conor and at the Geneva Conservatoire with Dominique Merlet. He achieved major international success by taking first prize at the Clara Haskil International Piano Competition in Switzerland in 1999. Since then he has developed a flourishing international career that takes him all over Europe, the United States and the Far East. Most recently, he made his Australian début in July 2016.

Over the past decade Collins has developed a close relationship with Claves Records in Switzerland, recording two double CDs of Schumann’s piano music (which won numerous awards including Gramophone’s Editor’s Choice in 2006), and a recording a CD of works for piano and orchestra by Charles V. Stanford with the RTÉ NSO / Kenneth Montgomery (Editor's Choice, May 2011). In May 2013 RTÉ lyric fm launched his recording of four Mozart piano concertos directed from the keyboard with the RTÉ National Symphony Orchestra. A new solo Chopin CD was released in 2017, a co-production between RTÉ lyric fm and Claves.