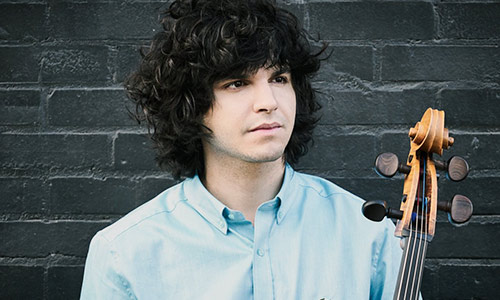 In 2017 Jamal Aliyev made his debut at the BBC Proms, won the Arts Club – Sir Karl Jenkins Music Award and was selected for representation by YCAT. His debut CD Russian Masters was released by Champs Hill records to critical acclaim.

Engagements this season include appearances as soloist at the Royal Festival Hall with the Philharmonia Orchestra, at the Enescu Festival at the Atheneum broadcast live on Medici television and with the Symphony Orchestra Simón Bolívar of Venezuela.

He returns to Wigmore Hall, makes his debut at the Istanbul Music Festival, premieres a new work by Karl Jenkins and records with Classic FM and Warner Classics.

Born in Baku, Azerbaijan in 1993, Jamal studied at the Yehudi Menuhin School and at the Royal College of Music with Thomas Carroll, where he embarks on his Master’s this autumn.

Jamal has performed widely in Europe and further afield, highlights including Wigmore Hall, the Menuhin, Kronberg and Enescu Festivals, Royal Festival Hall, the Atheneum (Bucharest), Forbidden City Concert Hall (Beijing), Rachmaninov Hall (Moscow), the Arts Parliament House (Singapore) and the Presidential Concert Hall (Turkey). In 2015 he was one of the first BBC Introducing Classical Artists selected, regularly appearing on BBC Radio 3 In Tune and with the BBC Concert Orchestra.

As a soloist he has appeared with the Bilkent Symphony and Presidential Symphony Orchestras of Turkey, Kennemer Jeugd Orkest, Eskisehir Symphony, Orpheus Sinfonia, the Sampson Orchestra of Cambridge, the Guildford and Croydon Symphony Orchestras, among many others.

During his studies Jamal has won numerous awards including the Musicians’ Company Prince’s Prize (2017) and 1st Prize at the Eastbourne (2016), Croydon (2015), Bromsgrove (2015), Muriel Taylor (2014) and V. Antonio Janigro International (2004) Competitions. In 2016 he won the Kronberg Academy Award at the Enescu Competition in Romania and received an honourable mention at the Pablo Casals Competition in France.

Jamal plays on a Giovanni Battista Gabrielli cello (1756) on generous loan from a private individual.