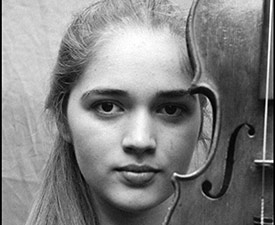 Amber Emson started playing violin at the age of 5 as a pupil of Margaret Norris and later Natasha Boyarsky; in 2009 she joined RAM’s Junior Department. As a student at Chetham’s School of Music 2014-16, she won the school’s Concerto Competition resulting in a performance of Mendelssohn’s Violin Concerto with Chetham’s Sinfonia at Manchester Cathedral, and the Catherine Perkins Chamber Music Prize. Amber is currently a music scholar at Reeds School in Cobham; she studies violin under the tutelage of Maciej Rakowski and enhances her music education at RCM’s Junior Department.

Prizes and awards in recent years include 1st prizes at Croydon Music Festival, Kingston upon Thames Festival of the Performing Arts, Springboard Festival in Brighton and Ealing Festival. In Germany's "Jugend Musiziert" competition Amber won 3rd prizes in 2013, 2014 and again in 2016. At the Eastbourne Young Soloist competitions in 2017 and 2018, Amber was awarded the St Cecilia Bequest for the most promising performer under 18. In the same years she won the Concerto Competition at Hastings International Festival. In May 2018, Amber won the 2nd prize at the X. International Competition for Violin and Viola "Szymon Goldberg" in Meissen, Germany.

During recent years, Amber's musical activities have been supported by generous grants from Awards for Young Musicians, EMI Music Sound Foundation, the Gerald Finzi Trust, the Rhona Reid Charitable Trust, and the Spoff's Chamber Music Scholarships; in addition, in 2017 and 2018 she has been a Junior Scholarship recipient at the Hattori Foundation.

Amber is a passionate chamber musician, having regularly participated at Pro Corda and MusicWorks courses. Together with her duo partner cellist Willard Carter, she won both last and this year’s RCM JD Chamber Music Competition and performed at the Wigmore Hall twice as part of their annual Young Artists’ showcase concert.

She plays on a fine violin by Matthew Taylor from 1806.