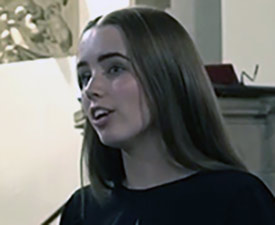 Hannah Dienes-Williams is 17 and a Music Scholar at Guildford High School. Her singing teacher is Gary Coward.

She joined Guildford Cathedral Choir at the age of nine and was its Head Chorister from 2017-18. Over her seven years as a member, she has featured as a soloist on two BBC radio broadcasts and a CD recording with the choir, as well as frequently performing solos in services and concerts, including the Pie Jesu from Duruflé’s Requiem with the Southern Pro Musica Orchestra, as well as works by Cecilia McDowell and James MacMillan.

Hannah was chosen as a finalist in the BBC Young Chorister of the Year competition in 2016 and 2017, which were broadcast on BBC Radio 2. She is featured as a soloist on Rebecca Dale’s ‘Materna Requiem’, a Decca recording released in 2018 which has reached the top position in the Specialist Classical Album Charts. She is a member of the Rodolfus Choir, and has performed internationally as a soloist, travelling to Venice, Florence, Brittany and Seville. Hannah is also an accomplished violinist, having been a member of the National Children’s Orchestras for four years. She is currently a member of the Cavatina Orchestra and Stoneleigh Youth Orchestra, attends Pro Corda chamber music courses and has appeared as a soloist on a number of occasions.