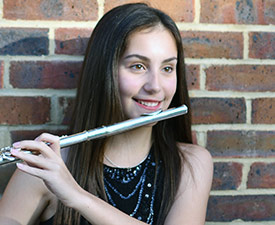 Hollie Tibbotts is 16 years old and has been playing the flute for nearly 10 years. Since she was 13, she was taught by Steve Goodwin at Woking High School and became Principal Flute and Piccolo for the Windband.  She also won the Lorna Patterson Award for Special Achievement in Music, resulting in being invited by the Mayor of Woking to play ‘Sonatina’ by Burton at their Civic Reception.

Hollie took part in the 2017/2018 Woking Music Festival winning the Woodwind Senior Category receiving The Unwin Cup.  She was invited to compete in The Woking Young Musician of the Year 2018 where she came third. The Music Festival Committee also awarded Hollie the Summer School Bursary from the Competition which allowed her to spend an intensive and rewarding residential week at The Oxford Flute Summer School at Radley College, with tuition from Kate Hill, Robert Manasse and Carrie Hensel.

In March 2018, Hollie auditioned for the Woking Young Musician’s Trust and was awarded the full Grant of £1000 to put towards the purchase of a new Yamaha piccolo to further her studies as a music scholar.

Her performing experience ranges from taking part in international concerts in Venice, Barcelona and Salzburg with soloist performances at various Civic Receptions for the Mayor of Woking.  Hollie is also a member of the Surrey County Youth Wind Orchestra where she has been playing flute and piccolo for three years.

Hollie is currently a first year Music Scholar at Farnborough Sixth Form College and is a private student of Katie Bedford from The Royal College of Music.  She is studying A Levels in Music, English Literature and Psychology.