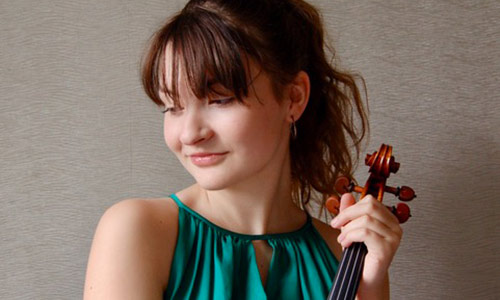 Isabelle Kauer is 16 years old, lives in Godalming and attends Guildford High School. She started violin lessons at the age of 7 and attended the Junior Department of the Royal Academy of Music on Saturdays for five years. She is now a private pupil of renowned teacher Lutsia Ibragimova.

Isabelle has won 1st prizes at several music festivals including the Junior Recital prize at the Farnham Music Festival and the Advanced Strings prize at the Woking Music Festival. She has also appeared as part of the Guildford Institute Young Performers series. She made her concerto debut aged 9 with the London Chamber Players Orchestra, playing 1st violin in Bach’s concerto for two violins.

She was a member of the 1st violins in the National Children’s Orchestra for several years as well as leading the String Orchestra at the Junior Royal Academy of Music.  A keen chamber musician, Isabelle has attended Pro Corda chamber courses from the age of 8, and her quartet was chosen to perform in the Pro Corda 50th Anniversary Concert last year. She has played in public concerts at venues all over the UK including the Wales Millennium Centre, Barbican Centre and the Royal Albert Hall.