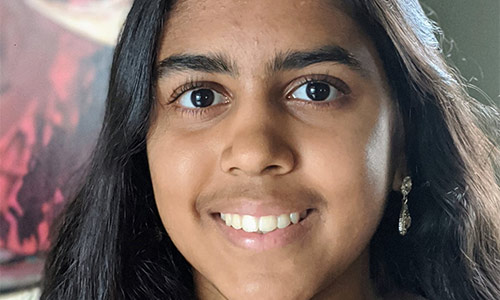 Imaan Kashim is fifteen, a home-schooled student of the Royal College of Music Junior Department (RCM JD) where she studies violin with Professor Viktoria Grigoreva, alongside classical guitar, composition and conducting.

In recent years, Imaan has been invited to perform at the Weill Recital Hall, Carnegie by the American Festival of Fine Arts, in addition to being selected as finalist for Woking Young Musician, Silk Street Sinfonia’s Senior Concerto Competition, the RCM JD Marjorie Humby Competition and the Haslemere String Competition.

Imaan is a member of the Royal Concertgebouw Orchestra’s European youth orchestra.  She is also a Junior Artist with the London Philharmonic Orchestra for 2019/20 receiving mentorship, masterclasses, partaking in outreach work and performing alongside the LPO.  Imaan is leader of both the Sinfonia Orchestra at RCM JD and Surrey County Youth Orchestra and plays with Chineke! Junior Orchestra with whom she performed the Bach double violin concerto at Kensington Palace in 2018.  She was a member of the National Children’s Orchestra for five years including leading their Main Orchestra in 2018.

Imaan has performed at many venues including the Royal Festival Hall, the Concertgebouw, Queen Elizabeth Hall, Menuhin Hall, Flagey and Birmingham Symphony Hall.  She also performed alongside Garsington Opera’s orchestra in Roxanna Panufnik’s 2017 opera, ‘Silver Birch’ and was featured by Classic FM when busking.