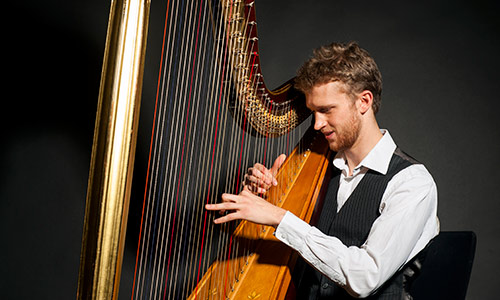 Oliver Wass holds a First Class Masters Degree from the Guildhall School of Music & Drama, where he studied with Imogen Barford. He graduated from the University of York with a First Class Honours degree in Chemistry.

He has performed every major harp concerto, including Alwyn’s Lyra Angelica with the Philharmonia Orchestra, the Mozart Flute and Harp Concerto with The Mozartists at Wigmore Hall, and he has directed the Handel Harp Concerto in the Barbican Hall. Last season he gave recitals in Rome, Paris, Budapest, Utrecht and London.

His recitals at the Purcell Room and Wigmore Hall were praised by Seen and Heard International for “tremendous dynamism” and "remarkable range of timbres and warmth of tone”. Wass is a Musicians’ Company Yeoman, and is very grateful for support from the Hattori Foundation.

He is an experienced orchestral player, and has performed with the Frankfurt Radio Symphony Orchestra and the Royal Northern Sinfonia.

Playing with “verve and polish” (The Times), his flute-viola-harp trio, The Pelléas Ensemble, won the Royal Philarmonic Society Henderson Award and the 2017 Elias Fawcett Award for Outstanding Chamber Ensemble at the Royal Overseas League competition. In 2016 they won both the Grand Prize and the Audience Prize in the St Martin-in-the-Fields Chamber Music Competition.

Oliver studied with Charlotte Seale at the Junior Department of the Guildhall, where he became the only harpist to have been a prize-winner in the prestigious Lutine Competition. He was additionally Principal Harp in the National Youth Orchestra. He spent his teenage years making fireworks in his parents’ home, which – some might say remarkably – is still standing.