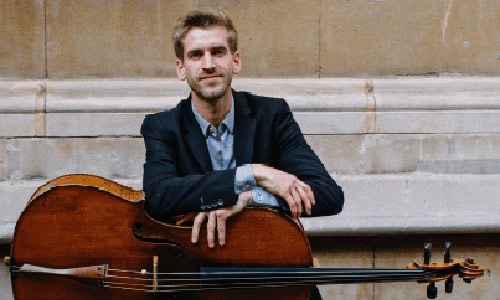 George Ross was a student at the Purcell School studying with Alexander Boyarsky with assistance from the Government’s Music and Dance Scheme. He has won prizes in Porec, Liezen, Marlow Festival Concerto Competition, the Martin Musical Scholarship fund and was given the Pierre Fournier prize in 2009. In the same year, he was awarded a scholarship to the Royal College of Music continuing to work with Boyarsky on modern cello and Richard Tunnicliffe on Baroque.

He has performed at the Wigmore Hall as a soloist and in chamber groups on many occasions. Other solo performance venues have included the Mayfair Arts Club, St John’s Smith Square, St. Martin-in-the-Fields, St. George’s Hanover Square, Hatchlands House and the Corn Exchange in Newbury. George has joined the Chillingirian Quartet for a performance of the Brahms Sextet and the Sacconi Quartet at Cadogan Hall. He has also worked with The Locrian Ensemble and the Adderbury Ensemble.

George founded the Consone Quartet in 2012, which performed on Radio 3 for a programme entitled ‘Between the Ears’ and was awarded the Century Fund Prize in the RCM Historical Performance competition. He is busy as a continuo player, recently performing with the Ballo Baroque ensemble in Germany, Les Bougies Baroques in Malta, the Herschel Ensemble in the London Handel Festival, The Lawes Baroque Players, the Carillon Choir, and with Florilegium.

George has been chosen to be a part of the Ann and Peter Law OAE Experience Scheme 2014. He is currently playing Kai-Thomas Roth’s copy of a Testore (1700) and also has the privilege of playing a John Corsby ’cello (1828), kindly loaned by the Cherubim Trust.