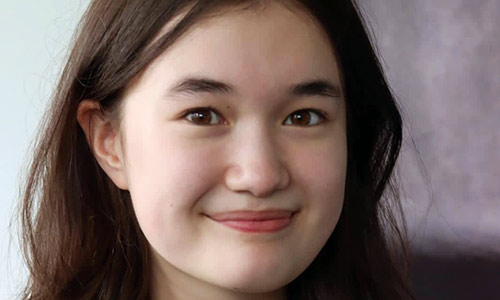 Henrietta Dalgleish (Violin) was born in 2005 in Royal Tunbridge Wells and started playing the violin at the age of six. She was accepted into the Royal College of Music Junior Department when she was only nine years old. A year later, Henrietta joined the Purcell School of Music and the following year led both the Purcell School and RCMJD String Orchestras. She now studies violin with the RCM Head of Strings, Mark Messenger.

At ten years of age, Henrietta joined the National Children’s Orchestra as first violinist. Henrietta was one of only eight musicians in the UK to be awarded a Leverhulme Scholarship. She went on to lead the orchestra in a performance of Tchaikovsky’s Sleeping Beauty Waltz.

Henrietta has won many competitions and prizes as a soloist. In 2017, she won first prize in the prestigious Hugh Bean Violin Competition which featured over thirty of the UK’s best young violinists. Henrietta also won first prize in the Cambridge Competitive Music Competition as best solo violinist. Gaining in reputation, Henrietta was approached by the Mackenzie Music Society to perform a solo at their annual concert. She also led her string quartet to the finals of the Pro-Coda Chamber Music Competition. As a result, Henrietta was featured in the Cambridge News which reported upon her many achievements.

In the summer of 2017, Henrietta toured Northern Italy with the International New Virtuosi, where she performed to audiences in various locations, including Trieste, Palmonova and Monfalcone. In 2019, she won the Purcell Middle School Concerto Competition playing Barber’s Violin Concerto. Following this, she performed the concerto accompanied by the Purcell School Sinfonia.

Throughout 2020/21, Henrietta has been online busking with her sister on Instagram (@twoviolinsisters) for the National Emergencies Trust ‘Coronavirus Appeal’ and have almost 10,000 followers. She has been doing this every day without fail for over 440 days. Henrietta started this initiative because she wanted to help people affected by the virus. Not only has she been able to raise money for the appeal, but has also been able to raise people’s morale, enabling them to feel more connected and less alone. This has been an extremely rewarding experience for Henrietta who specifically chose to raise money for the NET because they support many smaller charities which offer support in many different areas.

In the future, Henrietta would like to build a music school for less privileged children with her sister because she believes all children should have the opportunity to enjoy and study music.

Henrietta’s great-grandfather was the violinist and conductor, Lionel Falkman.