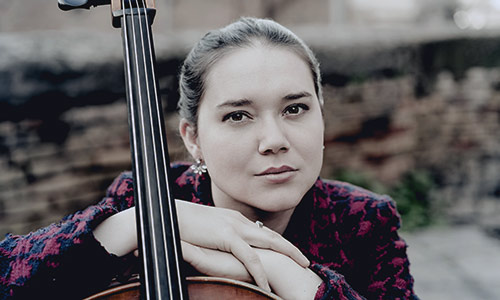 Born in London into a musical family, cellist Vashti Hunter is currently based in Berlin and enjoys a versatile career as soloist and chamber musician, being invited regularly to play in some of the world’s leading music festivals and concert halls. She is the first British cellist ever to be awarded a prize at the International Cello Competition ‘Prague Spring’ in its 65 year history.  Next season’s highlights include performances at the Wigmore Hall and LSO St.Lukes in London, a tour of the USA and a return to the Barbican Hall, where she will play Haydn Cello Concerto in C Major. She will also make appearances at the Lockenhaus Festival in Austria and at the Essen Philharmonie in Germany with BBC Young Generation Artist, soprano Katharina Konradi.

Vashti has performed in prestigious halls throughout Europe, including the Wigmore Hall in London, Schoenbrunn Palace in Vienna, Rudolfinum Prague, Salle Moliere in Lyon, the Philharmonie and the Pierre Boulez Saal in Berlin. She has played as a soloist with orchestras such as the the Göttingen Symphony Orchestra, Südwestdeutsches Kammerorchester Pforzheim, Pilsen Philharmonic and CHAARTS and has worked with conductors such as Gabor Tákács-Nagy and Antonello Manacorda.

Much in demand as both soloist and chamber musician, Vashti has been invited to important festivals such as PODIUM, Lockenhaus, Ernen, Davos, Heidelberger Frühling, Festspiele Mecklenburg-Vorpommern, Prussia Cove Open Chamber Music UK, Boswiler Sommer and the Shanghai Chamber Music Festival. She has collaborated with eminent artists including Steven Isserlis, Martha Argerich, Ivry Gitlis, Pekka Kuusisto, Ilya Gringolts, Erich Hörbarth, Nicolas Altstaed and Vilde Frang. In 2010 Vashti co-founded Trio Gaspard together with Greek-Albanian violinist Jonian Ilias Kadesha and German-British pianist Nicholas Rimmer. The piano trio has won first prizes in the ‘Haydn’ and ‘Joachim’ international competitions and perform regularly in some of the world’s most important halls.

In 2015 Vashti completed a ‘Konzertexamen’ degree with Leonid Gorokhov in Hannover where she was supported by generous awards from the Leverhulme Trust and Deutsche Stiftung Musikleben. She studied chamber music with Hatto Beyerle, attended the European Chamber Music Academy and studied for many years with Steven Isserlis at IMS Prussia Cove.

Between 2017 and 2019 she taught chamber music at the Royal Northern College of Music in Manchester and cello at the Hochschule für Musik, Theater und Medien Hannover.