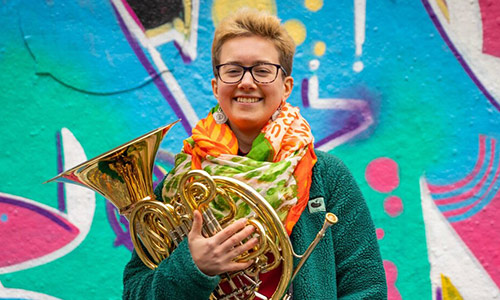 As a young hornist from Edinburgh, Robyn Blair has made her mark in chamber music through playing in the Connaught Brass quintet. She has recently gained funding towards a solo horn commission from the renowned trombonist and composer John Kenny, and aims to put on a trilogy concert of his solo brass works in Edinburgh alongside fellow ex-students of St Mary’s Music School. In February she will be performing and recording a premier of Hornpiece Solo by Luke Bedford.

A scholarship holder at the Royal Academy, Robyn has been able to learn from distinguished musicians such as Katy Woolley, Richard Watkins, Michael Thompson and Roger Montgomery.

She has enjoyed being both the principal horn and a section player for orchestral projects there as well as smaller scale chamber ensembles with conductors including Trevor Pinnock, Sir Mark Elder, Ed Gardner and Marin Alsop.

Outside of the Academy, professional engagements have included being the Principal Horn in Lucia Ronchetti’s Operetta Rivali, recorded and performed in Rimini, Italy, in July 2019. In November, she took part in the first performance of Miles Davies’ Porgy and Bess suite since it was first recorded, playing at the finale of the London Jazz Festival in St John’s Smith Square.

Her charitable work has included playing in and raising money for the organisation Street Orchestra Live, touring England from 2017-2019. She was a representative in their player’s and repertoire committees as well as a fixer for the orchestra. Alongside the music world, Robyn enjoys bouldering, slacklining, and cooking vegan banana bread on special occasions.