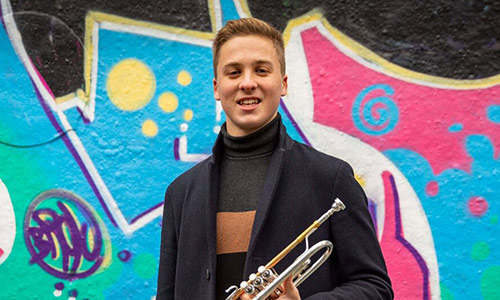 Harry Plant, born in Eastbourne East Sussex, graduated from the Guildhall School of Music and Drama in 2020 with a first-class honours degree studying classical trumpet performance. He started learning cornet at the age of 3, taught by his father, Marcus Plant. Throughout his childhood, he attended many of the local music service ensembles, as well as many of the local brass bands. As well as being classical trained as a trumpet player, Harry also has a vast amount of experience in the folk, jazz and pop genre, on trumpet and flugelhorn.

Harry’s professional credits have already seen him perform with Bruno Mars, Stormzy, Gregory Porter, Rag’n’Bone Man and Jamie Cullum. Alongside live performances, He has also played for a wealth of studio and film session work at Abbey Road, Sarm West, Angel Studios and the Rockfield Studios.

Harry’s brass quintet, Connaught Brass, is an internationally acclaimed chamber group very quickly making their mark on the brass chamber music scene. In the summer of 2019, they won first prize in the inaugural Philip Jones International Brass Ensemble Competition. The group had also previously won the Worshipful Company of Musicians Brass Ensemble Prize in 2018 and most recently they have been selected to become a Tillett Trust Debut Artist. This season will see Connaught Brass perform in Germany, Switzerland and across the UK, including debut performances at Wigmore Hall and the International Lucerne Festival.

In addition to his playing career, Harry is involved in a vast amount of educational work including whole class music lessons, wider opportunities projects, masterclasses, orchestral and chamber coaching and 1-1 lessons. In March 2019, Harry was invited by Hot Vox Record Company to judge the “Isle of White New Blood Competition’ in London, on a panel alongside 2 other music industry professionals. Alongside music, Harry also works as an event coordinator at a music venue in Eastbourne, which sees him manage anything from the event itself, the two bars, ticket sales and security.

Harry currently works as the Guildhall Student Union President, a role in which he took over in September 2020. The jobs responsibility is to ensure that the union is fully functional in its many roles throughout the school such as: representing the student body in a range of board meetings, organising events, managing the financial side of the union, raising awareness of student welfare issues and managing the SU team.

As well as music, he enjoys supporting his beloved football team, Liverpool FC, as well as playing for the Guildhall School Football Team Harry is involved in a vast amount of charity work, from performing/ organising concerts to charity rides. In the summer of 2018, he cycled the London to Brighton Charity Bike Ride, raising money for the British Heart Foundation.