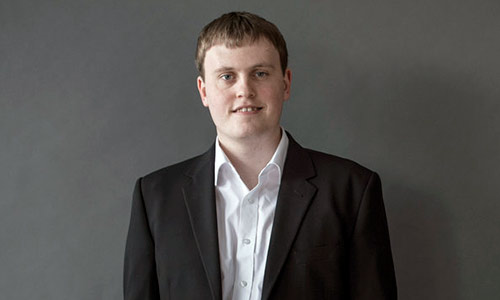 From Anglesey, North Wales, Jâms Coleman is a pianist who enjoys a rich and varied musical life performing as a soloist, chamber musician, and vocal accompanist.

Recordings include a disc of Czech and Hungarian music for Chandos Records with cellist Laura van der Heijden and a disc of Loewe lieder for Champs Hill with baritone Nicholas Mogg.

Jâms also enjoys working as a concerto soloist and performances include Beethoven’s Third, Fourth and Fifth Piano Concertos, and concertos by Brahms, Chopin, Ireland, and Mozart.

Jâms read Music at Girton College, Cambridge, where he was also a choral scholar. In 2016 he graduated with a masters from the Royal Academy of Music where he then stayed on as a Fellow. In 2018 he was the Artistic Director of a concert series based in St Clement Danes Church in central London which featured twenty-four lunchtime concerts and five evening concerts.