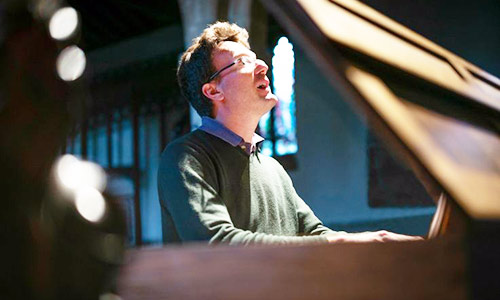 Shortlisted for the 2021 Gramophone Award, Julian Perkins is Artistic Director of Cambridge Handel Opera and Founder Director of Sounds Baroque. He has performed at the Salzburg Festival, Edinburgh International Festival and BBC Proms, and featured as soloist in concertos with the Royal Northern Sinfonia, Orchestra of the Age of Enlightenment, Florilegium and Orchestra of The Sixteen.

Passionate about singing, Julian has appeared as solo harpsichordist for productions at the Royal Opera House, Welsh National Opera and Northern Ireland Opera. He has taken part in the BBC Early Music Show and played at London’s Wigmore Hall, New York’s Lincoln Center and Sydney Opera House. An avid recitalist, Julian has broken new ground at over a dozen international festivals by giving concerts on the clavichord, and has performed numerous duo recitals for organizations such as the Mozart Society of America, Oxford Lieder Festival and the Royal Opera House. Julian's conducting and playing in concert and the recording studio has been praised for its 'demonic intensity' (BBC Music Magazine – Recording of the Month), 'fluid and natural pacing' (Gramophone – Editor's Choice) and 'verve and suavity' (Classical Music), conducting 'as if every bar means the world to him' (Opera – Disc of the Month) with 'performances that reach to the heart of the music' (International Record Review).

Julian read music at Cambridge University before pursuing advanced studies at the Schola Cantorum, Basle and the Royal Academy of Music, London. He is a visiting coach at the Royal Opera House, and gives masterclasses for the National Opera Studio, music colleges and universities