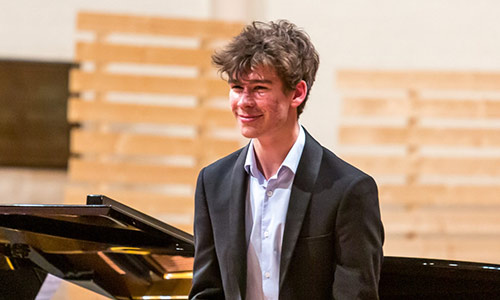 Will Everitt is an 18-year-old trumpeter and composer, performing and writing in both classical and jazz mediums. He began playing cornet with his local brass band at age 6, and attended the Junior Guildhall School of Music from age 12. He has previously played with the National Children’s Orchestra, and enjoyed performances at Cadogan Hall and the Hideaway Jazz Club as a music scholar at Reed’s School, Cobham.

Will has had regular competitive success in local festivals, including overall runner-up at Woking and Kingston Festivals, has played lead trumpet with the Surrey Country Youth Jazz Orchestra since 2020, and has been playing with the National Youth Brass Band since 2018. As a composer, he has won numerous awards, most recently winning BBC Young Composer 2021, resulting in a commission performed at the BBC Proms in August 2022. Will is intending to study composition and trumpet at conservatoire.