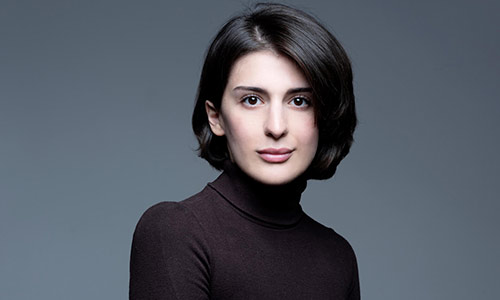 The pianist Mariam Batsashvili gained international recognition at the 10th Franz Liszt Piano Competition in Utrecht 2014. Her musicianship seems to connect directly with one’s heart and her colours of sound, thoughtful interpretations and stupendous touch move and delight her audiences. As BBC New Generation Artist, she made her debuts at the Cheltenham Festival, with the BBC Symphony Orchestra, the BBC National Orchestra of Wales and with the Ulster Orchestra at the BBC Proms. The summer of 2019 saw the release of her first album for Warner Classics and her second album has already been recorded.

She already gained her first experiences with leading symphony orchestras, including the Dutch Radio Philharmonic Orchestra under the baton of James Gaffigan in the Concertgebouw Amsterdam (Liszt Piano Concerto No. 1), the Rotterdam Philharmonic Orchestra under Rafael Payare (Tchaikovsky Piano Concerto No. 1) and the Royal Philharmonic Orchestra under Alexander Shelley (Liszt Piano Concertos Nos. 1 and 2). She has also given recitals in more than 30 countries – among these China, South Korea, Indonesia, Brazil, South Africa, France, Spain, Norway, the Baltic countries, Benelux and Germany. She has been the guest of many international festivals, such as the Beethovenfest Bonn, the Schleswig-Holstein Music Festival, the Piano City festival in Milan and the Piano aux Jacobins festival in Toulouse.

She was nominated by the European Concert Hall Organisation (ECHO) as ‘Rising Star’ for the 2016/17 season, and performed in the most significant concert halls throughout Europe. Last season, she gave performances at the Philharmonic Hall of St Petersburg, the Tonhalle Zürich, the Mozarteum Salzburg and the Wigmore Hall and made her acclaimed debut at the Philharmonie Berlin as part of the series “Debüt im Deutschlandfunk Kultur”.

Born 1993 in Tbilisi, Georgia, Mariam Batsashvili first studied with Natalia Natsvlishvili at the E. Mikeladze Central Music School in her hometown, before continuing at the Hochschule für Musik Franz Liszt in Weimar with Professor Grigory Gruzman. In 2011 she won First Prize at the International Franz Liszt Competition for Young Pianists in Weimar, and received the prestigious Arturo Benedetti Michelangeli Award in 2015. Mariam Batsashvili is a scholarship holder of the Deutsche Stiftung Musikleben and is supported by The Keyboard Charitable Trust. She has been an official Yamaha Artist since 2017.