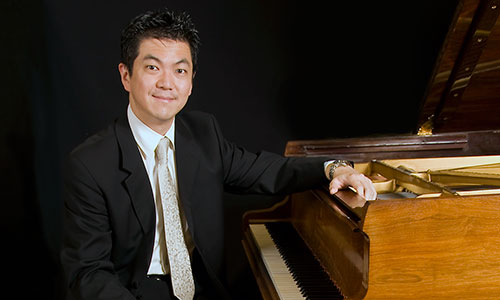 Tayama studied at the Toho University of Music in Japan, and subsequently in London on a Fellowship from the Japanese Government, where he was awarded the Performer’s Diploma with Honours from both the Royal College of Music and the Guildhall School of Music and Drama.

His first London solo concert appearance was in 2002 at the South Bank’s Purcell Room, and he gave his debut recital to a sell-out audience at the Wigmore Hall in 2007, both of which were met with critical acclaim. His Tokyo debut recital at Toppan Hall in 2005 was broadcast on Nikkei National Radio in Japan, and he was a featured pianist on BBC Radio, UK, in October 2012.

Tayama’s performances of Rachmaninov Piano Concerto No.3 with Osaka Symphonika at The Symphony Hall in Osaka, twice on the same day in July 2006 were hailed as ‘re-inventing the image of Rachmaninov’.

He made his USA debut in January 2006 at the Kennedy Center for the Performing Arts in Washington, where the recital was broadcast live on the Internet.

He has earned an enviable reputation as a Rachmaninov specialist, and is currently in the midst of a project to record Rachmaninov’s complete works for solo piano. His first recording of the two Sonatas won the accolade ‘Best Recording of the Month’ in Stereo magazine, and his second CD of the complete Rachmaninov Etudes-Tableaux and Morceaux de Fantaisie followed to critical acclaim.
The third disc of the two sets of Variations has been chosen as a ‘Tokusen-ban’ (Specially Selected and Recommended) in the January 2016 issue of Record Geijutsu, Japan’s most authoritative classical music and review magazine.

Tayama is much sought after as a teacher and adjudicator. He is a Professor at the Elmitt Piano Academy where he gives regular Master Classes and Lecture-Recitals, and is also a registered adjudicator with the European Piano Teachers Association.

He is one of the youngest faculty members at Chetham’s School of Music, and regularly gives solo recitals and Master Classes at the Chetham’s International Summer School and Festival for Pianists.