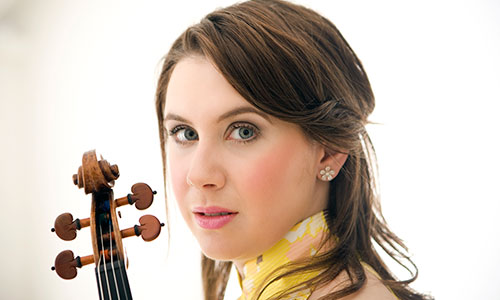 Chloë  Hanslip  (b.  1987)  has  already  established  herself  as  an  artist of distinction on the international stage.

Prodigiously talented, she made her BBC Proms debut in 2002 and her US concerto debut in 2003, and has performed at major venues in the  UK  (Royal  Festival  Hall,  Wigmore  Hall),  Europe  (Vienna  Musikverein, Hamburg Laeiszhalle, Paris Louvre and Salle Gaveau,  St  Petersburg  Hermitage)  as  well  as  Carnegie  Hall,  Metropolitan Arts Space in Tokyo and the Seoul Arts Centre.

Chloë  has  an  extensive  discography,  most  recently  recording  for  Hyperion,  her  first  release  on  the  label  featured Violin Concertos by Vieuxtemps (Royal Flemish Philharmonic Orchestra/Brabbins). Her CD of York Bowen Sonatas with Danny Driver received recommendations from Gramophone (Choice) and The Strad and her other Hyperionrecordings include Glazunov/Schoeck Concertos and Medtner Violin Sonatas. Other notable recordings include Bruch Concertos with the London Symphony Orchestra (Warner Classics) for which she won the  Echo  Klassik  Award  for  ‘Best  Newcomer'  (2002)  and  'Young  British  Classical  Performer'  at  the  Classical  BRITS (2003), and a highly acclaimed recording of John Adams Violin Concerto with the Royal Philharmonic Orchestra/Slatkin.