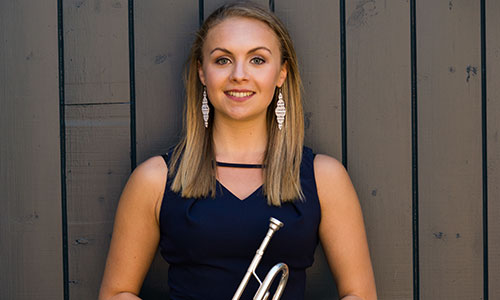 Matilda Lloyd, 22, won her first international trumpet competition in October 2017: the inaugural Eric Aubier International Trumpet Competition. Beating 53 other contestants of all ages from around the world, Matilda won the Master Category accompanied by the Opera Orchestra of Rouen, with which she will make her international debut with a tour of France in Spring 2019. Matilda gave her BBC Proms Solo debut in July 2016, performing the third movement of Haydn’s Trumpet Concerto with Alpesh Chauhan and the BBC Philharmonic in the two Ten Pieces II Proms at the Royal Albert Hall. She also performed live on BBC Radio 3’s In Tune Proms Special and BBC 4’s Women’s Hour.

Matilda is currently a Park Lane Group Young Artist, presenting programmes of contemporary music for trumpet and piano in London venues such as St. John’s Smith Square and St. James’ Piccadilly, and she will make her Wigmore Hall debut in their recital series in July 2018. As a Concordia Foundation Artist and a Making Music UK’s Philip and Dorothy Green Young Artist, Matilda performs concertos and recitals throughout the country. She also holds the Philharmonia’s Martin Musical Scholarship Fund Sidney Perry Brass Award. While studying at the Academy with Mark David, Matilda also receives tuition from world-class trumpet soloists. She participated in a week of masterclasses with Håkan Hardenberger as a Britten Pears Young Artist, sponsored by the Royal Warrant Holders Association Alan Britten Bursary, and a weekend of masterclasses in France with Éric Aubier. Matilda has performed as a soloist with the London Mozart Players in St. Martin-in-the-Fields and will appear at the Ryedale Festival this summer.

In 2014, Matilda won the BBC Young Musician of the Year Brass Final and the BBC Radio 2 Young Brass Award. As a result of winning these competitions, Matilda was the guest soloist with Cory Brass Band at the European Brass Band Championships Gala Concert in Perth, Scotland, and played with the BBC Concert Orchestra for Friday Night is Music Night. Recently, she was invited back to Friday Night is Music Night to perform for the special programme for BBC Radio 2’s 50th Birthday in September 2017. Matilda was the first ever trumpeter to win Junior Guildhall’s annual Lutine Prize in 2013 and won many regional Young Musician of the Year Competitions, including Woking, Guildford, Croydon and Marlowe (Canterbury).

Matilda was the Principal Trumpet of the European Union Youth Orchestra in both 2016 and 2017, touring Europe under Bernard Haitink and Vasily Petrenko and performing works such as Bruckner’s Seventh Symphony and Mahler’s First Symphony. She also played Principal at the orchestra’s appearance at the Gothenburg Festival in November 2016 and was a member of the orchestra in 2015. Matilda played in the Academy of St. Martin-in-the-Fields in September 2016 for Classic FM Live at the Royal Albert Hall and joined the Philharmonia Orchestra on tour to Klosters in December of the same year. Matilda was the Principal Trumpet of the Cambridge University Chamber Orchestra from 2014-15 and the Cambridge University Symphony Orchestra from 2015-16. Prior to this, Matilda held the position of Principal Trumpet of the National Youth Orchestra of Great Britain from 2012-14 and received many complimentary reviews in the national press for her rendition of the First Trumpet part of Mahler’s Fifth Symphony in the Barbican in January 2014. In her final year in the orchestra, she received the John Fletcher Brass Prize for her contribution to the orchestra.

Matilda is a keen chamber musician. She has led the EUYO Brass Quintet at prestigious engagements such as the opening of the EU Residency Building in Amsterdam and at the Austrian Embassy in London, and the EUYO Brass Dectet in various venues around Europe. She is a founding member of the Ibex Brass Dectet and the Ramiel Brass Quintet at the Royal Academy of Music, and was the lead trumpet of the Cambridge University Trumpet Ensemble for three years whilst studying at Cambridge.