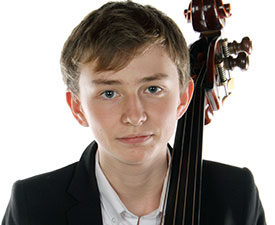 Will Duerden was born in 2000 and began to play the Double Bass when he was seven years old, starting with a three-quarter size instrument which was considerably bigger than him! A year later he performed with members of the Yehudi Menuhin School at an event organised in conjunction with the West Sussex String Academy, and was then invited to audition for the Menuhin School, where he is studying with Caroline Emery (who was able to lend him an instrument that was more appropriate to his size).

Since coming to the school he has taken part in numerous concerts as a soloist, orchestral musician and chamber musician, including appearances at the Shipley Festival, Wigmore Hall and the Menuhin Hall. He is also a member of the Symphony Orchestra at the Royal College of Music’s Junior Department, and in February 2017 he was invited to join a student orchestra in Sweden for a tour of concert halls and schools in southern Sweden.

He has been highly commended in many competitions, most recently gaining second place in the Haslemere Strings Competition in May this year.