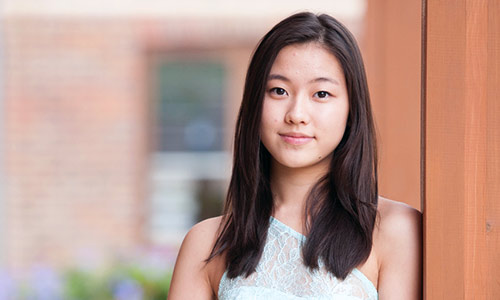 Coco Tomita was born in Japan in 2002 and began to play the violin when she was four years old. She became a pupil of Natasha Boyarsky when she was six, and in 2012 she was awarded a place at the Yehudi Menuhin School where she is continuing to study with Mrs Boyarsky.

In 2010, at the age of eight, Coco became the youngest contestant to win 3rd Prize in the Junior section of Andrea Postacchini International Violin Competition in Fermo, Italy. Two years later, she made her debut appearance at the Cadogan Hall, London performing as a soloist with the Southbank Sinfonia.

Since joining the Yehudi Menuhin School she has given many performances; in October 2013, she was one of the soloists for Vivaldi Concerto for Four Violins with the Menuhin School Orchestra in Holland, and a year later at the Milton Court, London alongside Alina Ibragimova. In 2015, she performed Bach Concerto for Two Violins at the Shipley Arts Festival, and was also invited to give two recitals in Ancona, Italy, as part of ZonaMusica Universal Musica concert series in Maiolati Spontini, and Incontri Musicali d’Estate at Istituto Campana in Osimo, Italy. Later in the same year, she performed the Mendelssohn Violin Concerto with the Dorking Chamber Orchestra. In 2016, she was actively involved in the Menuhin 100 Festival. She was selected to take part in the Menuhin Competition 2016 in London and has performed at The Royal Academy of Music and appeared on Sky News. She was also chosen as a soloist for the world premiere of Chagall’s Violin by Malcolm Singer, which was specially written for the Menuhin Commemoration Event and dedicated to Yehudi Menuhin’s daughter Zamira. Her most recent highlights include winning the 1st Prize and Duke of Devonshire Award in Eastbourne Symphony Orchestra Young Soloist Competition 2017, appearance at the Lammermuir Festival 2017’s launch concert, a highly successful performance of Tchaikovsky Violin Concerto with ESO in June 2017 as well as performing at the Palace of Holyrood, Edinburgh by kind invitation from the Duke and Duchess of Hamilton in October 2017.

Coco has also performed at various Masterclasses given by some of the internationally renowned violinists and professors such as Shmuel Ashkenasi, Zakhar Bron, Ida Haendel, Dong-Suk Kang, Lewis Kaplan and Wei-Dong Tong all of whom gave her an enthusiastic praise, encouragement and guidance.