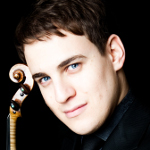 In 2009 Jack signed an exclusive contract with SONY Classical, for whom he has released the Dvorak Violin Concerto with Garry Walker and the Royal Scottish National Orchestra and Dvorak Sonata and Sonatina with Katya Apekisheva. Following this release, the Daily Telegraph and Evening Standard awarded it 'œCD of the Week' and the Telegraph declared: 'œthe young British violinist Jack Liebeck has in recent years been coming to the fore as a musician of exceptional gifts, blessed as he is with a glorious, mellifluous tone and interpretative insight. This is wondrous playing of the most compelling sort." It was this recording which secured him the 2010 Classical BRIT Award 'œYoung British Performer of the Year'. His latest disc of the complete Brahms Sonatas, again with Katya Apekisheva, was released in 2010 to huge critical acclaim.

Jack has recently been appointed Professor of Violin at the Royal Academy of Music and is Artistic Director of Oxford May Music Festival, a festival of music, science and the arts founded in 2008. [www.oxfordmaymusic.co.uk]