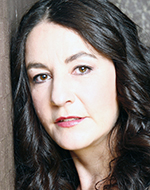 Jessica Duchen was born in London, where her parents settled after leaving South Africa in the 1950s. She regrets that she can't remember her encounter with JR Tolkein in Oxford at the age of six, which has become a family legend. She first tried to write a novel at the age of 12. Her efforts soon found their way into the hands of a distinguished author and a literary agent, who both  provided valuable encouragement. After studying at Cambridge, she worked as an editor in music publishing and magazines until going freelance to develop her writing.

As a journalist, she writes regularly for The Independent and has interviewed most of the world"s finest musicians. Her work appears frequently in BBC Music Magazine, The Strad and The Spectator Arts Blog; she has also contributed to The Guardian, The New Statesman and Gramophone.

She has given pre-concert talks at the Barbican, Wigmore and Royal Festival Halls and served on the juries of the Royal Philharmonic Society Awards and the BBC Music Magazine CD Awards. Jessica Duchen's Classical Music Blog has frequently been ranked among the world's top blogs of its kind.

Her novels focus on the tensions and cross-currents between family generations, ranging from a painful exploration of the effects of anorexia (Rites of Spring) and the rearing of a child prodigy (Alicia"s Gift ) to the long-term effects of displacement and cultural clashes (Hungarian Dances and Songs of Triumphant Love). Music is also a recurring theme and in 2009 the celebrated violin and piano duo Philippe Graffin and Claire Désert recorded a CD directly inspired by Hungarian Dances and designed as a companion to the novel. It is available from Onyx Classics. Songs of Triumphant Love, was published by Hodder & Stoughton in 2009 and has been acclaimed as "enthralling" by Joanna Lumley.

Jessica"s "literary concerts" for musicians and actors have been performed in the UK, France, Australia and America. Her first play, A Walk Through the End of Time, a one-act drama introducing Messiaen"s Quartet for the End of Time, was commissioned by her frequent collaborator, violinist Philippe Graffin, the artistic director of the Consonances Festival, Saint-Nazaire, in 2007 and won her the Medal of the Town of Saint-Nazaire. She and the great tenor Robert Tear gave the play"s UK premiere in 2008. A concert version of Hungarian Dances was well received at The Sage, Gateshead and King"s Place, London, during the Fiddles on Fire Festival in 2009, and in 2011 the pianist Piers Lane commissioned Franz Liszt: Sins of the Father from Jessica for the Australian Festival of Chamber Music in Townsville.

Jessica"s first books were biographies of the composers Erich Wolfgang Korngold and Gabriel Fauré. She wrote the text for 'Inside London', Dorothy Bohm"s photographic portrait of the city, and has published several short stories, notably Too Much Mozart, commissioned by Graffin for the booklet of his CD with Nobuko Imai of the Mozart Sinfonia Concertante. She lives in London with her husband and cat, and when not writing enjoys travel, cinema, cooking, jogging and attending occasional ballet classes, despite encroaching creakiness.