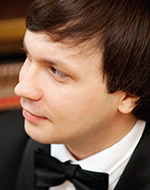 Equally at home in Classical, Romantic and Twentieth-Century repertoire Alexei Grynyuk has been invited to give solo recitals at many prestigious venues and festivals around the world, among them the Great Hall of Moscow Conservatoire, Wigmore Hall and the South Bank Centre in London, Salle Cortot & Salle Gaveau in Paris as well as Cervantino Festival in Mexico, Duszniki Chopin Festival in Poland, Musical Kremlin Festival in Moscow, Musica Sacra in Netherlands, West Cork Music Festival in Ireland, Newport Music Festival in USA and International Keyboard Festival in New York. He has also been broadcast on BBC Radio 3, Hessicher Rundfunk, Bayerischer Rundfunk, KRO4 Hilversum, Radio France and televised on Ukrainian, Lithuanian, Chinese and Russian channels.

Enjoying world-wide critical acclaim Alexei Grynyuk was described by "Le Figaro" as a 'œ'¦master of transparent and sovereign touch'¦astonishing personality and absolutely transcendental virtuosity'. After his performance with Maestro Barry Wordsworth "Worthing Herald" commented that "The mesmerising fingers of Ukrainian pianist Alexei Grynyuk gave an unforgettable rendering of Rachmaninov"s Rhapsody on a Theme of Paganini that even the composer himself would surely have appreciated".

Alexei"s musical development was shaped by his studies at the Kiev Conservatoire under Natalia Gridneva and Valery Kozlov. He also won a scholarship to the Royal Academy of Music in London where he studied with Hamish Milne. His career has been generously supported by Alexis Gregory foundation which led him to perform recitals at the renowned piano series at the Metropolitan Museum of Art in New York and Chateau Vaux Vicomte in France.

Last season besides the successful concerto appearances with the Bolshoi Symphony Orchestra, Brighton Philharmonic and Krakow Philharmonic Alexei Grynyuk celebrated an evening of Liszt"s Bicentennial in Kiev performing the composer"s B Minor Sonata followed by both piano concertos.

In the near future he will perform Rachmaninov"s Third piano concerto with the National Symphony Orchestra of Ukraine at the Rachmaninov Festival in Kiev, give a recital for the 150th anniversary of Kiev Philharmonic Hall.