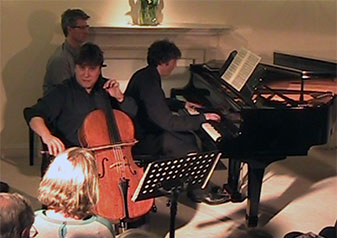 At the beginning of our 2014/15 series, in the short statement about each Soirée, I wrote, “this dynamic and charismatic duo have irresistible musical and personality charms with so much to offer to the audience”.  And I was right! It was a spellbinding experience in all aspects; the selection of the pieces (the coupling Variations on an operatic theme and a grand Sonata from the Romantic era in each half was very wise and exciting), the truly moving performance, the sounds, the atmosphere they created, the excitement poured out by the duo and received fully by the audience, the intimacy…..

From the first note of the first piece, Beethoven’s first variations, the duo captured our heart. The variations, based on a theme from Mozart’s opera A Magic Flute, lifted our spirits up with its dancing and singing features.

Then, what a contrast they brought with the Brahms E minor Sonata. The expressive and heart twisting first movement, which made you imagine the composer’s struggling state of mind, could not be more beautiful.

Martinu’s Variations on a theme of Rossini were an absolute delight. It was thrilling and exciting, and the duo made it into a complete show. The programme notes suggested that it required a particularly challenging bowing technique, but Thomas did everything with such ease that we just appreciated the marvellous music.

And then Rachmaninov’s Sonata – the last of his chamber works.  I loved all the movements but there was nothing more moving than the amazingly beautiful third. They took us through a whole journey from the turmoil of the first movement till the triumphant last movement, experiencing one emotional wave after another. What a musical journey, of heart and soul.

Thomas and Tony have been performing together for quite some years (they said they have performed the Rachmaninov 67 – 70 times!), and there certainly was a huge benefit of having experienced musicians with matured musicality. All musical dialogues tossed and received between the two instruments were spontaneous and timely with carefree dynamics and abundant emotional tides. No clumsiness and hesitation in their performance, the music was glorious throughout. Their informal talks about each piece added another pleasurable feather to the concert.

Both musicians really appreciated the opportunity to perform at Breinton, which did Breinton proud. They commented that the Brahms Sonata was composed to be performed in an intimate atmosphere, exactly like that of Breinton. Tony mentioned that Rachmaninov, having fallen into deep depression after being criticised for the Second Piano Concerto and having spent three years writing almost nothing, composed this beautiful Sonata for Cello and Piano in a house looking over a tree, not dissimilar to Breinton! They also complimented the acoustic of the room being wonderful. Both Tony and Thomas produced significant volume of sounds, but somehow they fit in perfectly into our space, entertaining the audience’s ears.

We all agreed that every Breinton recital was special and best in its own right. The concert by Thomas and Tony was yet another best which will be remembered by us for a long time. 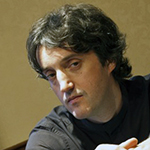 In the UK he has performed with orchestra at London’s Royal Festival Hall and Symphony Hall in Birmingham, given eight recitals at Wigmore Hall, and has appeared as chamber musician at King's Place and Cadogan Hall in London, Bridgewater Hall in Manchester, and Usher Hall in Edinburgh. Prestigious festivals include Swaledale, Newbury and Prussia Cove in the UK, Kronberg and Mecklenburg in Germany, Stift in Holland, and Bastad in Sweden.

Anthony trained privately in the Lake District with Patricia Shackleton, at the Yehudi Menuhin School with Seta Tanyel, and was accepted at the Curtis Institute of Music as a student of Leon Fleisher and Claude Franck at the age of 17.

Anthony's discography includes 'Protégé' (Divine Art Records) - the first coupling on CD of the Liszt and Reubke Sonatas - which was praised in International Record Review as "magisterial", and received a Gramophone recommendation. His debut CD was described by BBC Music Magazine as 'displaying a fine communicative and poetic musicianship'. He has recorded for Naxos with violist Sarah-Jane Bradley, and The Gramophone described the duo's recent performance on a disc of music by British composer Peter Fribbins as 'superb'. Other discs include a live recording from the Kennedy Center in Washington D.C. with violinist Tamaki Kawakubo on Japanese label Avex, as well as the pending release with Dimension Trio on the Champs Hill label.

An avid chamber musician, he is a member of Dimension Trio - winner of the prestigious Parkhouse award - who have received invitations to festivals and to perform with orchestras in the UK and abroad, including the Brighton Philharmonic and Lodz Philharmonic respectively. He performs regularly with distinguished artists such as clarinettist Emma Johnson, cellist Thomas Carroll, and has a two-piano duo with Martin Roscoe, with whom he recently shared a cycle of complete Beethoven Pianos Sonatas.

Further afield he has toured South America as a soloist and with ‘cellist Johannes Moser, and is a regular visitor to Japan performing with violinist Narimichi Kawabata. In May 2013 he gave the Armenian premiere of the Britten Piano Concerto, and in 2012 his most unique feat was in the guise of the ‘Olympianist’ which saw him cycling the entire length of the UK, 1200 miles from Land’s End to John O’Groats followed by a concert at the end of each day. He performed over thirty engagements and raised £13,000 for charity. Anthony's special-edition CD 'Piano Odyssey' was broadcast several times on Classic FM, and he also appeared twice on BBC Radio 3's 'In-Tune'.

In 2003 Anthony founded the Ulverston International Music Festival in his hometown in Cumbria with the aim of bringing internationally renowned artists – including Steve Isserlis, Tasmin Little, Natalie Clein, Chloe Hanslip, and Alina Ibragimova to name a few – to a rural part of England. As Artistic Director, part of Anthony’s role includes work in the community with local school children in workshops, family concerts, and master classes.

Anthony joined the faculty at the Birmingham Conservatoire in September 2013 and is frequently invited to judge on competition juries. He is based in South West London and his hobbies include cycling into the countryside, and skiing and hiking in the Alps. 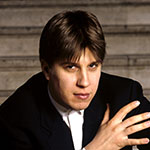 Born in Swansea, Thomas studied with Melissa Phelps at the Yehudi Menuhin School and with Heinrich Schiff in Austria.  An exceptionally gifted cellist, he is one of only two artists who auditioned successfully for both Young Concert Artists Trust in London and Young Concert Artists, Inc. in New York.  He has since gone on to give critically acclaimed debut recitals at Wigmore Hall (London), Alice Tully Hall (NY) and in Boston, California, Florida and Washington DC.

Much in demand as a chamber musician, Thomas has  worked with the Belcea Quartet, Chilingirian Quartet, Endellion Quartet, Yehudi Menuhin, Ivry Gitlis, Gidon Kremer, Steven Isserlis, Mischa Maisky, Michael Collins, Julian Rachlin at Wigmore Hall, the Edinburgh and Cheltenham International Festivals, among many others.  His recordings include Michael Berkeley’s String Quintet with the Chilingirian Quartet for Chandos.

Recent engagements include concerts at Wigmore Hall, the Louvre in Paris, Konzerthaus in Vienna, the Dubrovnik Festival, Bath MozartFest, Mecklenburg Festival and The International Chamber Music Festival in Utrecht with Janine Jansen, Julian Rachlin and Ensemble.  Thomas has also given a series of concerts in Tokyo under the auspices of YCA Inc, been resident at the Delft Festival in Holland and appeared as soloist with the BBC Concert Orchestra at the Queen Elizabeth Hall (broadcast by BBC Radio 3), Royal Philharmonic Orchestra, London Philharmonic Orchestra and Orchestre Regional de Cannes.  In August 07 he made his debut with the Melbourne Symphony Orchestra in a series of performances of Shostakovich’s Concerto No.2 and received an immediate reinvitation.  Last season Thomas returned as soloist with the Royal Philharmonic Orchestra, performed the Dvorák with the Staatsorchester Braumschweiger, Vivaldi Double Concerto with Heinrich Schiff and the Vienna Chamber Orchestra and gave recitals at the Cheltenham Festival and in Holland, Ireland, France, Belgium, Russia, Sweden and Japan.  This season sees a continuation of recitals in series and festivals throughout the UK, South Africa and Europe and concerti with orchestras including the Royal Philharmonic Orchestra, Philharmonia, London Philharmonic Orchestra, London Mozart Players and Cape Philharmonic.  2010 will see the release of Thomas and eminent pianist Llyr Williams’ CD of Beethoven, Schubert and Brahms sonatas on the Orchid Label.

Thomas is currently a Professor at the Royal College of Music in London and the Yehudi Menuhin School.