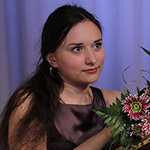 Born on 6th July 1989 in Ukraine, Dinara started her piano lessons in the age of five. Since 1996 she was studying in Kharkov Special Secondary Music School and the first landmark on her way was the 1st prize of  Usty-nad-Laba competition in Czech Republic she won already in the age of eight, as well as 1st prize of prestigious V.Krainev International competition (Ukraine).

Then, in 2001 she moved to Moscow to study with V.Pyasetsky in Central Music School of Moscow State P.I.Tchaikovsky conservatory. In 2007  Dinara to Moscow State conservatory in the class of professor Eliso Virsaladze, has graduated with Diploma of Honors and currently supported by ABRSM scholarship and the Guzik Foundation for her studies  at the Royal College of Music in London with Dina Parakhina.

Dinara has recorded CD “Music of Chopin and Liszt” for the label “Delos”.