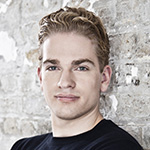 Joseph Moog is a two time Winner of the International Classical Music Awards ICMA. In 2012 he received the Award as “Young Artist of the Year, Joseph Moog crowned this achievement in 2014 having won the Award as “Solo Instrumentalist of the Year” ex-aequo with the celebrated pianist Elisabeth Leonskaja. Reviewers have been extolling the "Young Steinway Artist" "the most interesting interpreter of his generation" and are speaking of him as one of the "most remarkable phenomena in the current music scene".

Joseph Moog captivates audiences with his mature artistic personality, his transcendental virtuosity, and his bold, unique program selections, which include his own compositions.

Radio Bremen referred to him as a "treasure hunter with supernatural technical abilities" because, in addition to the customary piano repertoire, he uses his solo recitals to include highly virtuosic rarities from the "Golden Age" of artists such as Godowsky, Rubinstein, Moszkowski and Friedman. This young artist portrays stylistic authenticity, beautiful tonal nuance and a highly developed technical sensitivity combined with an enormous stage presence.

Among the highlights of the 2013/14 season are concerts in the Royal Albert Hall in London, in the Mariinsky theater St. Petersburg, in the Louvre Auditorium in Paris, De Doelen in Rotterdam, Auditorium della Conciliazione in Rome, concert halls in Dortmund and Berlin, the Laeiszhalle in Hamburg, the Meistersingerhalle in Nuremberg and debuts at international festivals such as La Roque d`Antéron, Ruhr Klavierfestival, Miami Piano Festival and a repeat invitation to the Tivoli Festival in Copenhagen.

In early May 2014 Joseph Moog will make his Japan debut within the prestigious festival "La Folle Journée au Japon".

Joseph Moog is a frequent guest performer at renowned concert halls such as the Stuttgart Liederhalle, the Alte Oper Frankfurt, the concert halls of Dortmund and Freiburg and the Munich Gasteig. He has performed internationally in Zurich, Basel, Vienna, Salzburg, Prague, Sofia, Antwerp, Milan, Paris, Beijing, Rio de Janeiro and Tel Aviv. His USA debut was in March 2011 with the Colorado Symphony Orchestra in Denver, conducted by Gilbert Varga.

Moog has an extensive discography and has received numerous awards for his recordings, as well as outstanding critiques from international press. His seventh CD entitled 'Scarlatti Illuminated' was released in 2013 by Onyx Classics and presents Scarlatti Sonatas and transcriptions by Tausig, Friedman and Gieseking.

Distinctions such as the International Classical Music Award (ICMA), the Musikpreis der Deutsche Konzertdirektion, 3 SuperSonic Awards, Advancement Award of the Rhineland Palatinate and Schleswig-Holstein Festivals, the Pianist’s Choice, the Prix Groupe de Rothschild (Sommets Musicaux de Gstaad) and the Rhine-Mosel Musikpreis document the professional path of the young pianist, who was named a Young Steinway Artist in 2009.