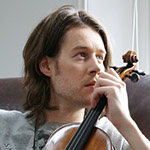 In January 2008 Thomas gave the world premiere of Nico Muhly’s concerto for six string electric violin Seeing is Believing.  Since then he has performed the work on numerous occasions, giving national premieres in Australia, Belgium, France, Latvia, the Netherlands and the United States (West Coast).  His 2011 début recording of Seeing is Believing with Aurora Orchestra and Nicholas Collon for Decca Classics received widespread critical acclaim.

Thomas has held the positions of leader of Aurora Orchestra since 2005 and associate leader of Britten Sinfonia since 2006.  He also appears as guest leader with the Academy of St. Martin in the Fields, London Sinfonietta and Mahler Chamber Orchestra.

Since 2011 Thomas has been violinist in the successful swing band Man Overboard.  Their first album ‘All Hands on Deck’, released by Champs Hill Records in 2013, received a recommendation from The Strad magazine, which wrote “this is playing that Grappelli himself would surely have been proud to call his own.”

Thomas is an associate of the Royal Academy of Music where he studied with György Pauk, and a former YCAT artist.  He plays a 1782 J.B. Guadagnini violin and a six string electric violin made by John Jordan.