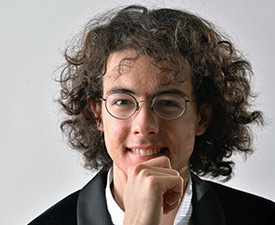 Turkish pianist Can Çakmur (pronounced: Djahn Tchakmur) is the first prizewinner of the 10th Hamamatsu International Piano Competition in 2018 and the Scottish International Piano Competition in 2017. Çakmur has performed in concert halls around the world such as Glasgow Concert Hall, Eindhoven Muziekgebouw, Lithuanian Philharmonic Hall, ACT City Hamamatsu and Fazioli Hall in Sacile, as well as the most prominent concert halls in his homeland, Turkey. He has appeared in the most important classical music festivals in Turkey; such as 43. Istanbul Music Festival, where he headlined the opening concert in 2015 with the Borusan Istanbul Philarmonic Orchestra (BIPO) under Sascha Goetzel. In the last season he has appeared in Bodrum D-Marin International Classical Music Festival, Ankara International Music Festival and Antalya Piano Festival. 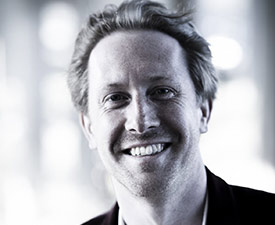 Simon Crawford-Phillips has established an extraordinarily varied career as soloist, chamber musician and conductor. He has made recent conducting debuts with the Swedish Radio Symphony Orchestra, Musica Vitae, Dala Sinfonietta, Nash Ensemble and English Chamber Orchestra and assisted Daniel Harding, Alain Altinoglu and Stanislav Kachanovsky at the Verbier Festival. In August 2016 he conducted the première of Britta Byström's Violin Concerto at the Baltic Sea Festival with Musica Vitae and Malin Broman and two weeks later was invited by Västerås Sinfonietta to open their season as conductor and soloist. As a result he was appointed chief conductor and artistic adviser of Våsterås Sinfonietta from 2017, a contract that has already been extended through 2023. 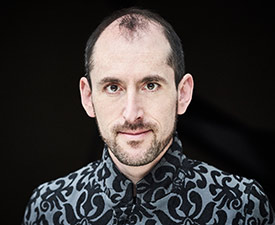 Gramophone Award nominated pianist Danny Driver is recognised internationally as an artist of sophistication, insight and musical depth. His studies at Cambridge University and the Royal College of Music inspired his uniquely holistic approach to performance and programming. Driver's 2021-2022 season will include a three-concert curated series at London's Wigmore Hall focussed on solo and chamber works of György Ligeti, and a co-curated series at Turner Sims Concert Hall with spotlight on J S Bach. More imminently he juxtaposes Beethoven's Hammerklavier Sonata with works by Maurice Ravel, Deirdre McKay and Betsy Jolas over the 2019-2020 season. 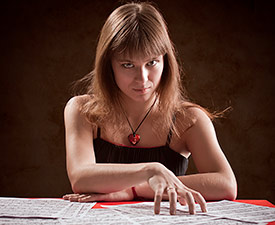 Anna Fedorova made her debut at the Het Concertgebouw at the age of 16 playing Chopin’s Piano Concerto No. 2 and since then has performed there over 30 times. 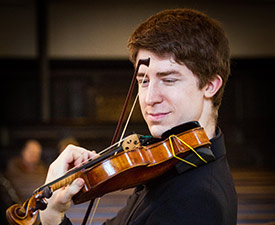 Michael Foyle won The Netherlands Violin Competition 2016. His acclaimed performance of Szymanowski’s Violin Concerto No.1 with the Rotterdam Philharmonic Orchestra led to an immediate invitation to give his debut recital at The Concertgebouw, Amsterdam. During 2017-18, he performs the concerti of Beethoven, Brahms, Dvorak, Elgar, Korngold, Lalo, Mendelssohn, Prokofiev and Tchaikovsky. In addition to his solo and chamber performances, Michael is engaged this season as Guest-Concertmaster of BBC Symphony Orchestra and Halle Orchestra. Born in Ayrshire in 1991, Michael gave his concerto debut in Edinburgh Festival Theatre aged eight. 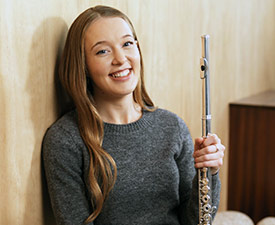 In demand flautist Emma Halnan first came to prominence as the woodwind category winner of BBC Young Musician 2010. In the grand final, she broadcast Reinecke’s flute concerto with the BBC National Orchestra of Wales live on BBC television and radio. Since then, she has gone on to perform at many of the major UK venues including Wigmore Hall, Cadogan Hall and St John’s Smith Square. She has performed live on BBC Radio 3’s “In Tune” on multiple occasions, as well as being broadcast on BBC Radio 2’s “Friday Night is Music Night” as soloist with the BBC Concert Orchestra. Emma has also appeared as concerto soloist with orchestras such as the European Union Chamber Orchestra and the Welsh Sinfonia. Her 2018 diary included two performances of Mozart’s Flute and Harp Concerto with the London Mozart Players and royal harpist Anne Denholm. 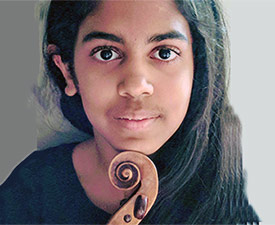 Imaan Kashim is fifteen, a home-schooled student of the Royal College of Music Junior Department (RCM JD) where she studies violin with Professor Viktoria Grigoreva, alongside classical guitar, composition and conducting.

In recent years, Imaan has been invited to perform at the Weill Recital Hall, Carnegie by the American Festival of Fine Arts, in addition to being selected as finalist for Woking Young Musician, Silk Street Sinfonia’s Senior Concerto Competition, the RCM JD Marjorie Humby Competition and the Haslemere String Competition. 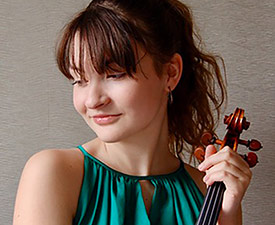 Isabelle Kauer is 16 years old, lives in Godalming and attends Guildford High School. She started violin lessons at the age of 7 and attended the Junior Department of the Royal Academy of Music on Saturdays for five years. She is now a private pupil of renowned teacher Lutsia Ibragimova.

Isabelle has won 1st prizes at several music festivals including the Junior Recital prize at the Farnham Music Festival and the Advanced Strings prize at the Woking Music Festival. She has also appeared as part of the Guildford Institute Young Performers series. She made her concerto debut aged 9 with the London Chamber Players Orchestra, playing 1st violin in Bach’s concerto for two violins. 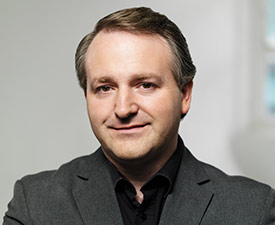 Daniel King Smith has given concerts all over the world as both soloist and accompanist. He has been broadcast on both BBC TV/Radio in the UK (In Tune, Proms, Young Musician of the Year) and NHK TV/Radio in Japan, most recently in recital with Yuki Ito as part of NHK’s “Best of Classic” and “Classic Club” series. Daniel has recorded a number of CDs, including releases with Yuki Ito for Sony and with Anna Hashimoto on the Meridian label.

As a soloist, Daniel’s extensive concerto repertoire has lead to many concerts in the UK and around Europe. He has frequently been a featured Solo Classical Artist on many Cruise lines around the world. 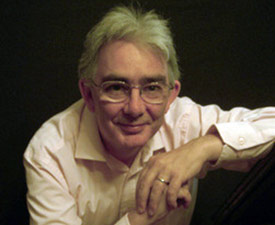 With more than 70 albums to his credit, reflecting an enormous variety of genres and styles, John Lenehan ranks as one of the most versatile pianists on the classical scene today. Praised by the New York Times for his “great flair and virtuosity” and the (London) Times – “a masterly recital”, John Lenehan has appeared in concerts throughout the World from Abu Dhabi to Zurich and from Aberdeen to Zimbabwe. As a soloist he has appeared with orchestras such as the London Symphony at the Barbican and the Royal Philharmonic in the Royal Albert Hall. John Lenehan has also collaborated with some of the leading    instrumentalists of our time and is recognised as an outstanding and versatile chamber musician. 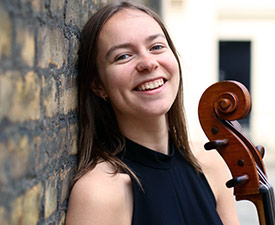 Laura MacDonald is a final year undergraduate scholar at the Royal Academy of Music studying with Felix Schmidt. She previously studied at the Royal College of Music Junior Department with Michal Kaznowski. A former member of the National Youth Orchestra (NYO), the National Children’s Orchestras, she has played at many of the UK’s major concert halls. More recently she performed as part of the BBC Proms Youth Ensemble at the Last Night of the Proms 2016. Laura is also a passionate chamber musician having attended Pro Corda chamber music school from a young age which included performances at the Wigmore Hall. More recently she has formed a piano trio, the Torridon Trio, with fellow Academy students. 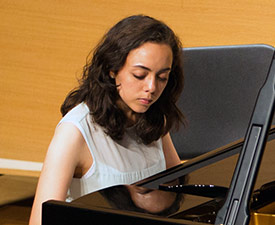 Annie McChrystal has had a great love for music from a young age. Her first piano teacher was Marlene Fleet who fired up her passion for the instrument and for music generally, and this interest has continued. Annie is now studying with Julia Freeman at St Catherine's School, Bramley, where she is the Junior Jennifer Bate Organ Scholar. Annie particularly enjoys the collaborative element of chamber music work and accompanying; she is also a competent violinist. 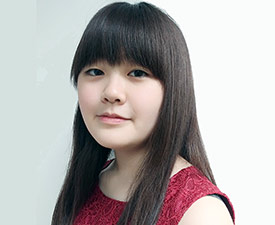 Kotone Ozaki was born in 2003 and started studying the classical guitar at the age of 3 with Mr Noboru Muraji. She began to play the piano when she was five years old.

While studying at a music specialist middle school in Tokyo, she had notable successes with prominent competitions; the first prize at the Classical Guitar Competition, which is one of the biggest guitar competitions in Japan, and the fourth prize in the Under 14 Category of the  Guitar Foundation of America Competitions, one of the most well-known guitar competitions in the world.  Also while at the middle school, Kotone had a chance to play the viola da gamba and sanxian (Chinese lute), and learned voice 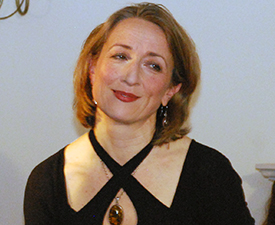 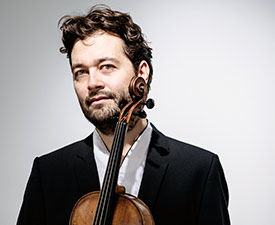 Lawrence Power is one of today’s foremost violists, in demand worldwide as a recitalist, concerto soloist and chamber music partner. His artistry and penetrating musicianship gains him constant plaudits around the world, reflected in turn in eloquent reviews: ‘no musician today better equipped to play than the minstrel-like Power’ (Financial Times), ‘Power is something more: a profound musical personality, his every phrase new and noteworthy’ (Sunday Times). Over the past decade, he has become a regular guest performer with orchestras of the highest calibre, from the Chicago Symphony, Boston Symphony, Royal Concertgebouw, Bayerischer Rundfunk, Stockholm, Bergen and Warsaw Philharmonic orchestras to the Philharmonia, BBC Scottish Symphony and Royal Liverpool Philharmonic orchestras. 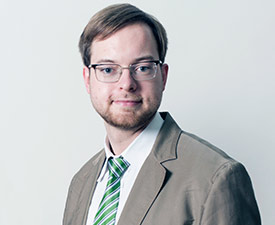 Maksim Štšura is an Estonian pianist, composer and music scholar based in London. He performs extensively as soloist and chamber musician in the prestigious concert halls across the United Kingdom, including St Martin-in-the-Fields, Purcell Room and the Wigmore Hall. He received his Master of Music degree from the Royal College of Music in 2013, studying under Gordon Fergus-Thompson and has also completed the prestigious Artist Diploma course with him in 2014. He previously graduated from the Estonian Academy of Music and Theatre where he studied with Ivari Ilja. In 2008-09, he participated in an Erasmus exchange at the Hochschule für Musik und Theater Hamburg, where he worked with Volker Banfield. 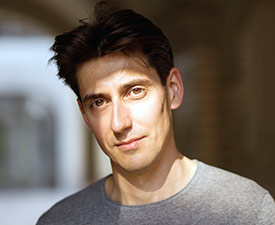 Yevgeny Sudbin has been hailed by The Telegraph as “potentially one of the greatest pianists of the 21st century”. As BIS Records’ only exclusive artist, all of Yevgeny’s recordings have met with critical acclaim and are regularly featured as CD of the Month by BBC Music Magazine or Editor’s Choice by Gramophone. His Scriabin recording was awarded CD of the Year by The Telegraph and received the MIDEM Classical Award for Best Solo Instrument Recording at Cannes. It was described by Gramophone as “a disc in a million” while the International Record Review stated that Yevgeny’s Rachmaninov recording “confirms him as one of the most important pianistic talents of our time”. His 10th anniversary disc of Scarlatti Sonatas was received with equal rapture and not only hit No. 1 in the Classical Music Charts but was also nominated for the Gramophone Classical Music Award. Yevgeny was also nominated as Gramophone Artist of the Year in 2016. 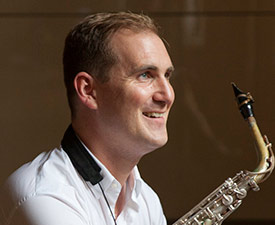 Commonwealth Musician of the Year, First Prize and Gold Medal winner of the 2014 Royal Over-Seas League Annual Music Competition, Huw Wiggin is one of the most popular saxophonists of his generation. 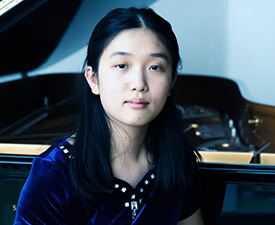 At the age of 16, Lauren Zhang won the BBC Young Musician Competition performing with the City of Birmingham Symphony Orchestra to widespread critical acclaim. Highlights since then include her debut at the BBC Proms and appearances as soloist with the London Mozart Players, European Union Chamber Orchestra, China National Symphony Orchestra and Sinfonia Varsovia Orchestra in Warsaw.

Over the last year, Lauren has performed in the Tonhalle in Zürich and at Klavier-Festival Ruhr. She gave recitals across the UK, as part of the Ryedale, Lichfield and Wooburn Festivals, amongst many others. Her performances have been broadcast live on BBC Radio 3 and 4, TVN24 in Poland, and Deutschlandfunk in Germany. She also attended the Verbier Festival Academy and was accepted to the Curtis Institute of Music.