It was a splendid summer's evening with virtuoso violinist Alina Ibragimova. I always get excited and carried away talking about music but, really, her performance of six YsaÃ¿e Sonatas was completely out of this league. I feel it is wrong and unnecessary to analyse and comment on her pieces, because the whole programme was so convincing in every respect. However I cannot stop being excited about it so here we are. Her technical command was beyond description, her tone shone throughout the evening; despite the demanding double stops and fast passages of all kinds of scales, her intonation was acutely spot-on. But more than anything, Alina had the projection to draw us into her music and her world. We understand that YsaÃ¿e's solo sonatas are not everybody's cup of tea, and all six of them in one evening could be quite challenging to appreciate. However there was no challenge – we were transformed and transfixed.

Take as an example, the third movement Allegretto poco scherzoso of Sonata No. 1. The first chord, played ever so faintly and sweetly as if floating in the air, and the sweet melodies that followed, were alone worth the whole evening. Straight into the powerful Finale con brio made a drastic change and contrast. The first movement Obsession of Sonata No. 2 was spiritually haunting. The third movement was again haunting and had an out-of-worldly feel. Throughout the Sonata, Alina showed extraordinary power and overwhelming strength which literally made my blood rush. With Sonata No. 3 Ballade, I thought her phrasing was persuasive and invincible. Danse rustique in Sonata No. 4 was such a joyful and lovely dance that brought smiles to our faces, but I know how technically demanding it is. The final Sonata was simply jaw dropping. I could go on and on.

For Breinton, it was a landmark recital. We feel privileged to have a talent like Alina perform to our intimate crowd. This was the evening that reminded me why she is 'the' violinist of our time who is in demand everywhere.

Leading up to this recital I did my duty of studying the pieces by listening to random recording by various violinists. None of them compared to this evening's performance where I truly appreciated the inner beauty of the sonatas. Alina is currently recording all the Sonatas she performed this evening. We look forward to the release of her CD! 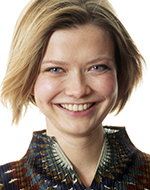 The Times has written that Alina Ibragimova performs with "a mixture of total abandonment and total control that is in no way contradictory" and that she is "destined to be a force in the classical music firmament for decades to come".

As soloist/director Alina has toured with the Kremerata Baltica, Britten Sinfonia, Academy of Ancient Music, and the Australian Chamber Orchestra.

Born in Russia in 1985 Alina studied at the Moscow Gnesin School before moving with her family to the UK in 1995 where she studied at the Yehudi Menuhin School and Royal College of Music, and was a member of the Kronberg Academy Masters programme. Alina's teachers have included Natasha Boyarsky, Gordan Nikolitch and Christian Tetzlaff.

Alina has been the recipient of awards including the Royal Philharmonic Society Young Artist Award 2010, Borletti-Buitoni Trust and a Classical BRIT, and was a member of the BBC New Generation Artists Scheme 2005-7. Alina records for Hyperion Records and performs on a c.1775 Anselmo Bellosio violin kindly provided by Georg von Opel.